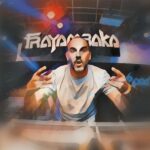 Charalambos Pieris is the man behind the project CLAW. His involvement into electronic music starts way back in the 90s with several releases in house Music and chillout as well as electronica. He started djing around 2000 and then he was introduced in to Psychedelic music. This was around 2004 and since then he played in many countries around the world in parties and festivals, released 1 album, 3 EPs and lots single releases under the name CLAW. He also has numerous collaborations with famous names in the scene, as well as a couple of alternative projects… Most important thing being a producer & dj is the feeling you get while performing and watching the crowd digging what you play and mostly what you produced, as well as meeting and making new friends from different countries of the world. CLAW music is powerful and sensational with deep basslines and futuristic sounds. His music introduces weird soundscapes and dripping sounds, each track has a different story to tell with a unique and exceptional journey