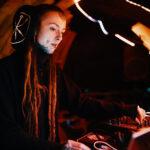 BIOGRAPHY
Art was always an important part of Kathrin’s life, so one thing came to another when she got in touch with psychedelic music. After painting and tattooing, music production opened her a beautiful and infinite way to discover new ways of expression.
Always been fascinated by the theme “Modern Primitive”, her project KAYA became the fulfilling part of the puzzle.
Humankind has always been attracted to rhythm, just as KAYA is in the present time. Discovering the ancient instincts in herself, she is creating Modern Primitive music.
Kathrin released her first EP in 2014 on Lunatic Alien Records and her debut album in 2017 on Alice-D Production. 2018 has been a busy year, she joined Berlin-based label Quintessence Records, released her 2nd EP “Holy Hall” and played many sets at acclaimed events like Freqs of Nature Festival, SimSalaBoom Festival and Gayatri Festival in Brasil.
2019 saw the release of her newest album „INDEED.“ on Quintessence Records and a first performance at Masters Of Puppets Festival.