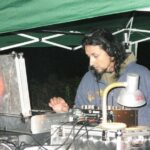 MDS is Nelson Jara Dos Santos, born in belgium in 1975 . In 1994, while living in Portugal, Nelson was invited to a camping weekend. Little did he know, his life was about to change forever, for it was Goa Gil party! Hooked by the whole scene, Nelson threw his boat into the waters of psytrance, and has been floating about ever since.

Nelson released his first MDS track in 2006 and his debut album, “He Claims to be Not Human” was released on Trishula Records in 2007.

As co-founder of Lycantrop Records, Nelson takes care of the musical elements and aspects of the label (artist roster, releases, etc). In addition to producing as MDS, he is also 1/2 of the Underground Directive project (with Mario/DJ Device), and he offers mastering services as MadMaXstering. He also manages the printing and packaging of professional audio CDs for 3Suns, specializing in low-volume/high quality CDs.