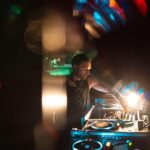 Mutaro got in touch with electronic music back in the year 2004, which turned out as a highly
inspiring impact on his life, that soon leaded to his very first own musical steps.
Over the years, he constantly developed his skills and style in playing DJ-Sets and gained a solid
reputation in the national and international scene.
He is one of the founders of the Munich based dark psychedelic trance label „Deviant Force
Records“, which is wellknown for its output of consequently deep & dark nighttime music. In the
past years he compiled several CD`s and digital compilations for different labels like Deviant Force
Rec, Active Meditation Music and S.L.R. All compilations went directly into the divine dozen of
Goa Gil.
He played in countries like Austria, Brazil, Switzerland, Italy, Czech Republic, Portugal, Thailand,
India, Costa Rica, USA, Spain, Israel, Germany and on a variety of national and international
festivals like Freqs of Nature, Paradise Festival, Psychedelic Circus, Midgard, Kannibalen
Massaker, Odyssee, Ufo Bufo , Kali Mela.
Besides being an active DJ, his newest musical developments are tending towards own productions.
He already had a couple of successful releases on labels such as Deviant Force, Insomnia,
Discovalley, Quintessence & more.