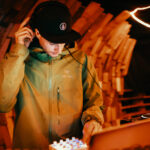 BIOGRAPHY:
Yons is a young, aspiring producer from Berlin, Germany.
Coming from a musical family background, he got in touch with Psychedelic Trance at an early age and during an intense festival summer 2012, fell in love with its sound and culture.
In 2014, he started his own musical project and since then, he didn’t waste any time to gain a comprehensive set of skills as a producer and live-act and at the same constantly enhanced his musical studio setup.
After releasing his first tracks on different web-labels, Yons just recently started his own label “Quintessence Records” together with like-minded fellow Sascha Kamino. Being deeply influenced by the approach of various renowned producers, he still rapidly managed to develop a unique style in his productions and is already well-known for performing highly-entertaining, elaborate live sets.
In 2018, Yons mostly worked on building up the new label and constantly improving his production techniques. He released 2 collaboration tracks with AudioSyntax & Audiopathik on the first Quintessence compilation “Early Intervention” and a collaboration track with Ankur for his “Seres Sessions” EP.
Furthermore he had many bookings on acclaimed festivals like Freqs of Nature Festival, Masters Of Puppets, SimSalaBoom :: OpenAirFestival and even made a short trip to Mexico to play at Poison Festival.